When do you need Ionisation?

Occasionally we are asked "how do you ground an insulator"? Since an insulator is a non-conductor, by definition, it cannot be grounded. What ESD control process is used to deal with insulators? The answer is ionisers or neutralisation.

The primary function of an ioniser is to neutralise electrostatic charges on insulators and isolated (nongrounded) conductors to reduce the magnitude of electrostatic discharges in the ESD protected area. Point-of-use compressed gas ionisers combat electrostatic attraction (ESA) neutralising charges on particles that otherwise cause contamination or visual defects on products. See the Vermason Chargebuster Ion Gun and Ion Python System.

A common example of insulators and isolated conductors is a populated circuit board where the board is a process essential insulator and often components on the board are isolated (non-grounded) conductors. Most companies handling electronics have such sub-assemblies in their products.

Also as electronic components become more ESD sensitive, many companies will want to add ionisers to improve their previously acceptable ESD control program. See Sept 2012 InCompliance Magazine article "Now is the Time for ESD Control Programs to be Improved" which includes "Factory ESD control is expected to play an ever-increasing critical role as the industry is flooded with even more HBM (Human Body Model) and CDM (Charged Device Model) sensitive designs." Regarding ionisers, it says "If the ESD control program has not used ionization that should be considered. If the ESDS [ESD sensitive] items becomes charged, ionization will help neutralize the charge. The primary function of ionizers with regard to ESDS items are:

Per EN 61340-5-2 User guide clause 4.7.6.1 "The primary method of static charge control is direct connection to ground for conductors, static dissipative materials and personnel. However, a complete static control program must also deal with isolated conductors that cannot be grounded as well as insulating materials (e.g., most common plastics). ...Air ionization can neutralize the static charge on insulated and isolated objects by charging the molecules of the gases of the surrounding air. Whatever static charge is present on objects in the work environment, this will be neutralized by attracting opposite polarity charges from the air."

Per Table 3 ESD protected area requirements of EN 61340-5-1, the test method for product qualification and compliance verification of Ionisation is per ANSI/ESD STM3.1 (product qualification being performed at 12 % RH and 23 degrees C while compliance verification being just the basic test procedure in the factory). The limit for decay time is less than 20 seconds and the limit for offset voltage balance is less than ± 50 volts.

Vermason designs and manufactures ionisers primarily using corona discharge. The positively and negatively charged ions are moved to the work area via fan airflow. The Bench Top and Overhead Ionisers should direct the ionised airflow to where the ESD sensitive items are handled. Zero Volt Ionisers produce nearly an equal amount of positive and negative charged ions and provide a very low offset voltage balance (typically ± 3 volts). The low offset voltage is controlled by an auto-balancing sense feedback consistent with EN 61340-5-2 User guide clause 4.7.6.5.4.4 "Various feedback and auto-balance methods are available to assure ionizer performance. ...Providing a sensor for each ionizing device can improve feedback control. Also, an effective monitoring and control method can reduce the amount of maintenance required for proper operation of the ionizer device or system."

Per User guide CLC/TR 61340-5-2:2008 clause 4.7.6.7 "All ionization devices will require periodic maintenance for proper operation. Maintenance intervals for ionizers vary widely depending on the type of ionization equipment and use environment." Ionisers should be pieces of equipment that have serial numbers and are included in the company's maintenance and calibration schedules. This is particularly critical to ensure that the offset voltage or balance is within acceptable limits. Otherwise, instead of neutralising charges, the out of balance ioniser will charge insulators and isolated conductors. The user, depending on the value and function of their products, must determine the appropriate frequency of maintenance and calibration.

Auto-balancing closed-loop feedback technology can save money and extend the maintenance interval of the ioniser. What the sensor detects is that the offset voltage (balance) has shifted and the circuits will attempt to compensate. In the case of corona ionisers, one of the reasons for a shift in offset voltage is frequently the particle build-up, commonly called a "fuzz ball", observed on the emitter points.

"Steady state DC Systems consist of separate negative and positive ion emitters connected by a pair of high voltage cables to their respective high voltage power supplies. The spacing between emitters will vary depending on the design, and DC power is constantly applied to the emitter points. Emitters of opposite polarities are spaced farther apart in the DC systems than in the AC systems. Ion recombination occurs at a lower rate and steady state DC systems will operate at a lower airflow than AC systems. In some situations, it may not be desirable to place sensitive components close to the emitter points. The electric field of the ionizer is used to move ions in the absence of high airflow." [EN 61340-5-2 User guide clause 4.7.6.5.1.3 Steady-state DC ionizers]

Per EN 61340-5-2 User guide clause 4.7.6.1 "Air ionization is not a replacement for grounding methods. It is one component of a complete static control program. Ionizers are used when it is not possible to properly ground everything and as backup to other static control methods. In clean rooms, air ionization may be one of the few methods of static control available."

ESD Flooring – To Be or Not to Be 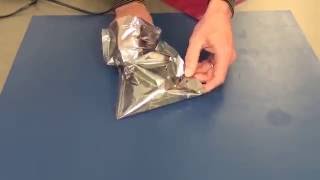 Detect and Measure ESD Events with our EM Eye Meter